Higgs to WW to lnu lnu used to be a channel in which the group has been strongly involved between 2009 and 2018 contributing to the discovery of the Higgs boson in 2012, its property measurement in the subsequent years, and finally searches for heavy neutral Higgs boson using Run1 and the early Run2 data.

Higgs to WW to lnu lnu is one of three decay channels which contributed to the discovery of the Higgs-like boson in 2012, and the latest results can be found in the paper: Observation and measurement of Higgs boson decays to WW* with the ATLAS detector . 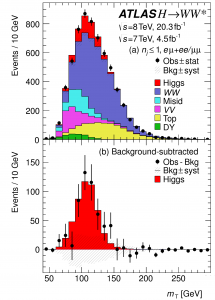 The main contribution of the ATLAS-LAL group is the proposal of a data-driven method for estimating the top background contribution in the dominant 0-jet channel and its application in the H->WW* analysis as well as other ATLAS analyses.
A review can be found in the LAL report 13-373 (Nov. 2013) and an example of application in the measurement of the WW cross section and limits on anomalous gauge couplings

In the early stage of data-taking with the limited integrated luminosity, we have been also interested in searching for the Higgs boson in a model with a fourth generation heavy quarks such that the search sensitivity is much higher by a factor up to 9 than that of the SM (see this article).

We have also contributed to the measurements of the properties of the Higgs boson in terms of couplings, spin and parity and width by maximizing the analysis sensitivity e.g. by extending the analysis to low lepton transverse momentum and using the multivariate technique.

The new interest of the group is to search for additional heavy neutral Higgs boson, which has been performed with Run-1 data (link) and is being continued with Run-2 data (link).

The group is in collaboration through the FCPPL project with a number of Chinese institutions (IHEP, Nanjing Univ. Shandong Univ. and USTC) for the nominal ggF analysis, IFIC for the VBF analysis, Kobe university for the top reduction/improvement in the 1-jet channel and KTH royal institute of technology for Dell-Yan and W+jets background studies.