The decay of the Higgs boson into pairs of b-quarks is the most common one with a probability of 58%, but has been observed in 2018 only. The reason is that compared to clean signatures such as the diphoton decay or the decay into four leptons, the cross-section of background processes is much larger than that of the Higgs, resulting in small signal over background ratios.

The ATLAS group at IJCLab has been involved in the Hbb search since 2014, with a focus on the associated production of the Higgs boson with a vector boson (W or Z). This production mode is by far the most sensitive to look for Hbb decays thanks to the clean signature of leptonic vector boson decays.

Our team has contributed significantly to all aspects of this analysis during the Run-2 of the LHC, with leading roles in the W(l nu)H(bb) and Z(nu nu)H(bb) channels, and in the statistical analysis of the data.

This work led to four papers and one conference note, among which was the first observation of the Hbb decays. More recently, the analysis of the full Run-2 dataset allowed to strengthen the significance of the observation, and to perform differential cross-section measurements, which in turn allow to test the Standard Model predictions and set constraints on beyond-the-Standard Model physics.

In this mbb distribution the measured Higgs boson signal contribution is shown. The size of the combined statistical and systematic uncertainty on the fitted background is indicated by the hashed band : 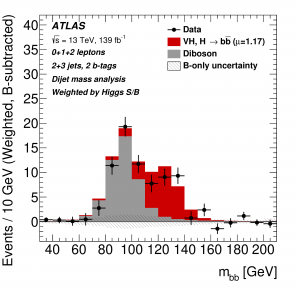 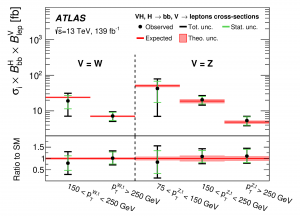